Twenty years ago, the worst nuclear power accident in history took place in the Ukraine at the Chernobyl Nuclear Power Station. The details of the accident are described extensively on a number of different websites, and I will not go through them here. But I will take the opportunity to talk about nuclear safety.

The amazing and terrifying thing about the nuclear reaction is its capability to multiply exponentially in a fraction of a second. That is the basic principle of the nuclear weapon. You start with a chunk of fissile material, and you configure it and detonate it in such a way that in a fraction of a second the fissile material is consumed and liberates its stored nuclear energy.

Now we imagine a nuclear reactor—a unit that carries a vast amount of fissile material and we imagine and wonder if it could explode like a bomb. The quick answer is no—-at least most kinds of reactors can’t. The reason is in the design. All reactors in the United States are designed to have a “negative temperature coefficient of reactivity”, which is a complicated way to explain a simple principle. When the temperature in the reactor increases, the rate of nuclear fission in the reactor must always decrease. Conversely, when the temperature decreases, the rate of fission can increase, under the right conditions. But in all conditions, no matter what, if the temperature increases, the fission rate must decrease. This is the basis for the safe design of all nuclear reactors.

The Coefficient of Reactivity

Permit me to spend a little time talking about the temperature coefficient of reactivity, and why it must always be negative. It is the single most important quantity in any reactor design, and the reason why can be understood from a thought experiment. Let us imagine, for a moment, that instead of being negative, the temperature coefficient of reactivity were positive. This would mean that if the temperature in the reactor were to increase, then the fission rate would increase. If the fission rate increased, then the reactor would generate more power and heat, which in turn would lead the temperature to rise, which in turn would lead to more fission, until boom! The reactor would either explode, like a nuclear bomb, or explosively disassemble itself. This of course is not acceptable. 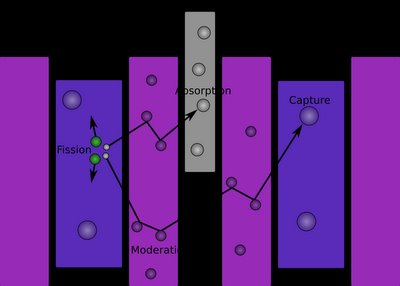 What about a LFTR  (Liquid Fluoride Thorium Reactor)? How does it maintain a negative temperature coefficient? There’s no water to moderate the neutrons, so how does it work? Well, assuming that the liquid-fluorides are circulating through a lattice of solid graphite (graphite is chosen as a moderator material because it is stable at high temperatures whereas water is not, although it is an inferior moderator to water), then fission will only take place when the neutrons generated from fission are moderated in the graphite. The negative temperature coefficient comes about because as the salt heats, it expands, and as it expands, there is less of it in the core. That means that the neutrons generated from fission tend to “leak” out of the core more when the salt gets hotter, which has a strong influence on the fission rate, causing it to fall, and reducing the rate of fission. So unlike the light-water reactor, which depends upon the thermal expansion of the moderator to reduce fission rate, the liquid-fluoride reactor depends upon the expansion of the fuel itself.

This actually gives the liquid-fluoride reactor a significant advantage over the light-water reactor in nuclear response. Even though the water expansion is very effective in generating a negative temperature coefficient, there is a time dependence built into using moderator expansion instead of fuel expansion—it takes time for heat generated in an “excursion” to conduct through the fuel, gas gap, and clad, to heat the moderator (water) and cause the restoring effect. In some classes of nuclear accidents, it is possible to melt the fuel so quickly that the heat hasn’t even made it outside of the fuel element to the moderator to stop the accident from occurring.

Nevertheless, in general, water-cooled and moderated reactors can rather easily achieve negative temperature coefficients of reactivity, and reactors with fluid fuels (such as the liquid-fluoride reactor) can achieve VERY strong negative temperature coefficients due to fuel expansion. But a basic assumption in both cases is that the reactor is in its most reactive configuration during operation.

At Chernobyl, through a combination of bad design, bad operation, and bad understanding of the response, the reactor got into a situation where it briefly had a positive temperature coefficient. And in a few seconds, the power generated by the reactor exponentially increased to many times its design rating, the water coolant flashed to steam, and the reactor disassembled itself in a steam explosion. Without a containment building, there was nothing to hold the force of the explosion in, and then the core began burning from un-removed decay heat.

It didn’t have to happen, and shouldn’t have, but it will always stand as a lesson of why the temperature coefficient of reactivity must always be strongly, strongly negative in a reactor.