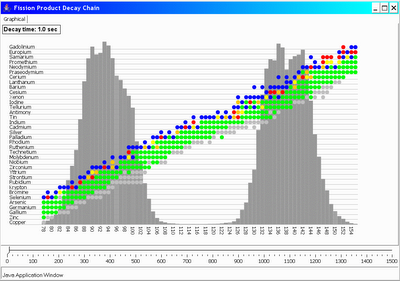 OK, I think the first version is ready to go:

Basically what you will see when the simulation comes up is a graph of the radioactive isotopes produced by fission, arranged vertically by what element they are, and horizontally by their atomic mass.

When a nucleus fissions, it produces two fission products. You might think they they would roughly be the same size, but that’s not what ends up happening. One is bigger and one is smaller. The distribution of atomic masses is shown by the gray bars. As you can see, there are two “humps” to the curve.

Since heavy nuclei like uranium and plutonium have many more neutrons than protons for atomic stability, when they fission, their fission-products end up neutron-rich. Nature corrects this through the process of beta-decay, where a neutron turns into a proton and emits a beta particle (electron). Beta decay doesn’t really change the atomic mass of a nucleus (since the emitted electron has very little mass) but it does change its atomic number, which governs what type of element it is.

Thus, when a pair of fission products are generated, they will march “upward” through beta decay, converting their neutrons into protons, until they achieve nuclear stability.

You can see this process happen graphically by moving the time slider on the bottom of the simulation. As you move it left-to-right, you increase the amount of time the fission products are allowed to decay, and you see their yield bars (the gray bars) fading out. The “fade” factor of the bar is given by a mathematical calculation of the amount of the longest-lived radioactive isotope in a given mass chain that remains.

For instance, on the chain with a mass number of 90, the longest-lived radioactive isotope is strontium-90. As you move the decay time, nothing much changes til you get to about 30 years (the first half-life of Sr-90) and then you see the bar begin to fade out, according to the radioactive decay of the element.

One of the things to notice from this simulation is how that after about 300 years, most of the chains have decayed to stability.