As we approach the fourth of July and reflect on the declaration of America’s independence 230 years ago, it is not hard to see the shackles of dependence in many parts of our country. We are addicted to foreign oil, Chinese consumer goods, Japanese cars (which I love!), inexpensive Mexican labor, and foreign investors who underwrite our national debt at low interest rates.

In turn, these dependencies alter our course of action as a nation. I remember reading recently how Secretary of State Condoleeza Rice said that one of her biggest surprises of her new job was how much the need for foreign energy interferes with diplomatic activities. In other words–we can’t treat bad countries like bad countries because they have so much oil.

I am looking forward to a new “Independence Day”, a day marked by the independence of the United States on foreign countries (many of whom are hostile to our nation and its values) to provide the energy supplies we need. I truly believe that thorium is the fastest, safest, and most effective way to achieve this goal. I say this because thorium energy (through the fluoride reactor) can replace the baseload electrical generation currently provided by coal, gas, and solid-core uranium reactors. But thorium and the fluoride reactor can go further: we can use the high operating temperatures of the fluoride reactor to thermochemically generate hydrogen, which can then be used to hydrogenate coal (or other carbon-rich materials) to generate synthetic hydrocarbons. Eventually we can transition to an electric-car economy, or at least plug-in hybrid cars where the electricity is provided by thorium.

As I have noted in other posts, the thorium reserves of the United States are sufficient to provide for itself not only for tens of thousands of years, but for the entire world as well. And they have their own thorium should they desire it. 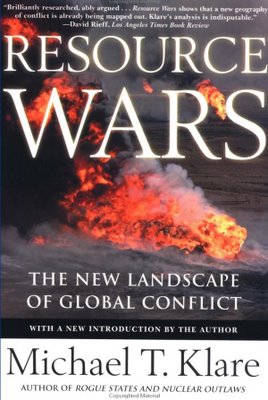 The alternative is rather bleak. An excellent text on the future we should expect if we proceed along the “business-as-usual” course is “Resource Wars” by Michael Klare. In this well-researched book, Klare describes the wars over petroleum, fresh water, and natural resources that we can expect in the next century. The lands of conflict probably won’t come as a surprise: the Persian Gulf, the Caspian Basin, the South China Sea, the Congo delta, and so forth. What they all have in common is that these conflicts flow out of continued dependence on petroleum and an ever-shrinking ability to produce it.

True independence is not found by increasing the US production of oil. Even if we produced all the oil we needed, oil is a globally-traded commodity, and we will always be dependent on those who are large producers (Saudi Arabia, Iran, Venezuela) to keep prices down. If any one of them turns off the spigot, so to speak, the global price skyrockets, and any US oil production goes overseas in search of better prices. That is why I take a dim view on drilling in ANWR or on the coasts–it’s not a solution, and it may not ever be much of a bandaid.

We have to get off the commodity altogether to free ourselves from dangerous oil-producing nations. And that will require access to an energy source of equal or greater magnitude. There are only a few options, and I think thorium is the best. Let us look forward to that day of energy independence.