Some people have asked about the issues and potential dangers of thorium, especially relative to uranium. I have extracted this section from an AEC book published on thorium in the late 1950s. To sum it up, thorium, like other heavy metals, is toxic in the body. It is radioactive but with an exceptionally long half-life of 14 billion years, which means individual thorium-232 nuclei decay at an incredibly slow rate. Nevertheless, once a Th-232 nuclei decays, it proceeds through its decay chain relatively quickly, arriving at its final stable form of lead-208 with a minimum of long-lived intermediate nuclei.

So don’t eat thorium, don’t breathe thorium, just put it in the reactor and make energy.

Prior to 1945, industrial interest in thorium was confined almost entirely to its use in the manufacture of gas mantles. Consequently, there was little interest in the health and safety of thorium operations, and little published information about the hazards of its use in industry. But with the advent of the atomic age, attention focused on thorium as a possible source of nuclear energy. As a result, interest increased greatly in the toxicity of thorium and the inherent radiological hazard in processing thorium materials.

Considerable research on thorium toxicity was done at the University of Rochester under USAEC contract. Published reports describe in detail this work and the findings. Others reported on the radiological problems in thorium operations. Standards were recommended for air, water and body concentrations of thorium and its daughter products. Both chemical and radioactivity toxicity will be discussed, but since the chemical toxicity of thorium is lower, radiation toxicity is the controlling hazard.

9-2 Radiological toxicity. Of more importance to the management and workers in thorium plants than thorium’s chemical toxicity is its radiological hazard. To recognize exposure problems that may be encountered and to install the controls necessary to protect personnel, a thorough understanding of the radioactive decay of thorium is necessary.

The thorium decay series begins with Th-232, which has a radioactive half-life of 13.9 billion years, and ends with the formation of Pb-208, a stable isotope. In the transmutation of the parent thorium to the stable lead, a total of 10 other radioisotopes are formed. Four of these intermediate isotopes decay through beta emission and five through alpha emission. One isotope, Bi-222 (thorium C), may decay by either alpha or beta emission. Figure 9-1 shows the decay series of thorium. Also shown are the half-lives for the radioisotopes in the series as well as the energies of the alpha, beta and gamma radiations. 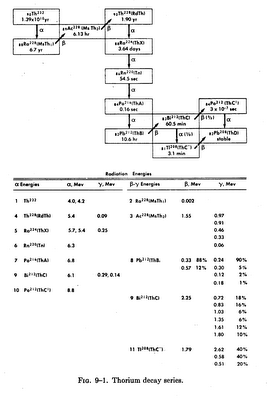 It can be seen from this figure that the thorium decay series differs considerably from the uranium decay series in that the half-lives are all relatively short, the longest being the 6.7-yr radium-228. Thorium-228, which exists in equilibrium with Th-232 in thorium which is either unseparated or freshly separated from other materials in the series, has a half-life of 1.9 years. The half-lives of other isotopes in the series range from 0.3 microsecond to 3.64 days. 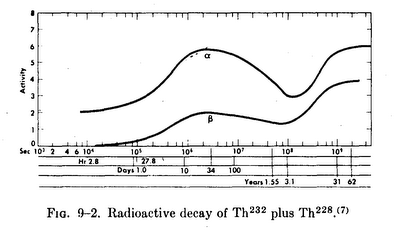 When thorium is separated from other isotopes in the decay series, the thorium fraction has only a slight alpha activity. There is no beta radiation and only a slight amount of gamma radiation (from the 0.09-MeV gamma rays which emanate from Th-228 decay). However, the activity from the Th-228 side of the chain is quickly re-established. A first equilibrium state is reached in about 36 days (10 half-lives of Ra-224). Activity then declines, as Th-228 decays faster than it is replenished by decaying Ac-228. About 3 years after separation, the activity is lower than at any other time except immediately after separation. From this point, activity increases until the second equilibrium state is reached in about 60 years. The initial buildup, decline, and second buildup of alpha and beta activity are shown by activity curves in Fig. 9-2. Since the alpha particle causes the highest ionization per unit length of path, it is this radiation which is of greatest concern in considering radiation inside the human body. Externally only the beta and gamma radiations are cause for concern.

The above indicates that the radiological hazards in processing thorium vary with the degree of separation, the concentration of the toxic members of the chain, and the interval between the processing steps. In general, the non-thorium fraction poses the more serious handling, storage and disposal problems.

Illustrations of specific situations may be of value. In the sulfuric acid treatment of monazite, most of the non-thorium fraction remains in the silica sludge. Another source of radioactivity connected with treatment of ore is the Rn-220 that is released. Radon-220 is not only hazardous itself, but decays rapidly into radioactive products; unless it is removed by a ventilating system, dangerous levels of radioactivity may be built up in working areas. The Rn-220 problem exists also in inadequately ventilated storage spaces containing thorium or its compounds.

The aqueous raffinate solution from the tributyl phosphate purification process also has relatively high concentrations of the radium isotopes. In precipitating thorium oxalate from a thorium nitrate solution on a production scale, approximately 70 percent of the Ra-228 usually remains in the filtrate. In the vacuum casting of thorium metal, a good share of the residual radium isotopes escape from the metal and deposit on the interior of the furnace.

If radioactive material enters the body, the thorium-type substances tend to settle in the liver, kidneys, spleen, lymph nodes and bone marrow, whereas the radium-type substances are more likely to be in the bone. Hence, the body receives radiation in both bone and tissue.

An example of the acute radiotoxicity of some of the
isotopes involved can be found in the work on Th-228 by Finkel and Hirsch. These authors state that Ra-228 is as toxic as Po-210, Pu-239 or U-233. The 20- to 30-day LD50 for these alpha emitters fall between 36 and 58 microcuries/kg and indicate a toxicity within the first month after injection twenty times as great as that for Ra-226. The 20- to 30-day LD50 value for Ra-224 was estimated at about 1000 microcuries/kg of body weight. On the activity basis, these LD50 values suggest that when thorium is separated from the radium isotopes, Ra-228 constitutes the main health hazard. This has been substantiated by other investigators. 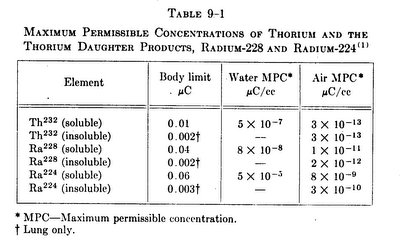 Considering only parent or natural uranium and thorium freshly separated from its daughters, uranium has about three times the alpha activity of thorium. The U-238 parent, through alpha emission, becomes Th-234, a beta-emitter with a half-life of 24.5 days. Through beta decay, Th-234 becomes Pa-234, which decays, by beta-emission (half-life, 1.13 min) to U-234. After isolation of U-238, the equilibrium beta activity from Th-234 and Pa-234 is re-established in less than 1 year. At this stage of equilibrium, there are two alpha and two beta particles emitted per U-238 disintegration. A relative stability which exists for thousands of years is thus achieved, and equilibrium with the remainder of the uranium series is not re-established until about 10 half-lives of Th-230 have elapsed. This takes 800,000 years. While the decay rate of Th-232 is only one-third that of U-238, the number of alphas emitted per disintegration of Th-232 is, except for brief periods of time after separation, three times that of U-238. The total energy of the alpha radiation from thorium is 36.2 MeV. The total energy from U-238 plus U-234 is 9 MeV. Considering all factors (specific activities, total energies and percent of equilibrium attained), thorium deposited in the body appears to be a slightly greater radiological hazard than an equal quantity of uranium. Its slow clearance from the body makes it a potentially hazardous material.

It is the Th-234 and Pa-234 found with the uranium which account for the beta activity in natural uranium. The beta radiation from uranium in equilibrium with Th-234 and Pa-234 exceeds that from thorium in equilibrium with all of its daughters. Beta dose rates in contact with infinite sources would be approximately 240 and 115 mrem/hr for uranium and thorium, respectively. On the other hand, thorium gives considerably more gamma radiation than does uranium. Uranium dose rates from infinite sources have been estimated at about 10 mr/hr in comparison with 50 for thorium. Dose rates from the time of separation until the time equilibrium is achieved are lower, being related to, but not in direct proportion to, the percent or fraction of equilibrium activity achieved.

One thought on “Health and Safety Aspects of Thorium Production”