In the latest news from ORNL, the project to downblend and “dispose” of uranium-233 manufactured over the last 50 years appears to have hit another snag. Now the price tag is up to $380 million, and the timetable for disposition has been delayed to 2012. 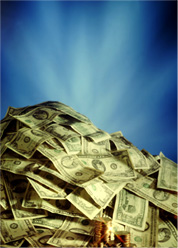 In one sense, I am very glad for that. 2012 gives us more time to convince those in power that this U-233 is not waste, but rather practically unlimited energy. That is because the U-233, once introduced in a fluoride reactor, will sustain the indefinite burning of abundant natural thorium. U-233 is almost like the bread-starter that people used for millennia to bake that day’s loaf of bread, saving a little of the new dough at the end for the next day’s loaf.

As such, U-233 should not be downblended, oxidized, or disposed. It is precious, and should be used in a fluoride reactor. How far could we get on fluoride reactor development with $380 million over the next five years? It would sure be a lot better than the $0.04 million that fluoride reactors are getting under the international Generation-4 program currently.