Q: What is thorium and what makes it special?

A: Thorium is a naturally-occuring mineral that holds large amounts of releasable nuclear energy, similar to uranium. This nuclear energy can be released in a special nuclear reactor designed to use thorium. Thorium is special because it is easier to extract this energy completely than uranium due to some of the chemical and nuclear properties of thorium.

Q: What is a liquid-fluoride reactor?

A: A liquid-fluoride nuclear reactor is different than conventional nuclear reactors that use solid fuel elements. A liquid-fluoride reactor uses a solution of several fluoride salts, typically lithium fluoride, beryllium fluoride, and uranium tetrafluoride, as its basic nuclear fuel. The fluoride salts have a number of advantages over solid fuels. They are impervious to radiation damage, they can be chemically processed in the form that they are in, and they have a high capacity to hold thermal energy (heat). Additional nuclear fuel can be added or withdrawn from the salt solution during normal operation.

Q: Are the salts safe?

A: Very safe. Unlike other coolants considered for high-performance reactors (like liquid sodium) the salts will not react dangerously with air or water. This is because they are already in their most stable chemical form. Their properties do not change even under intense radiation, unlike all solid forms of nuclear fuel.

Q: Have liquid-fluoride reactors been built before?

A: Yes, two liquid-fluoride reactors were built at Oak Ridge National Laboratory in Tennessee in the 1950s and 1960s. These were small research reactors that were built to test the fundamental principles of a liquid-fluoride thorium reactor. The first, which was called the Aircraft Reactor Experiment (ARE) ran for a week in 1957, and the second, the Molten-Salt Reactor Experiment (MSRE) ran between 1965-1969 and validated many of the principals of the fluoride reactor concept.

Q: How does a liquid-fluoride reactor make electricity?

A: Fission reactions take place in the fuel salt, making it hotter. This heat is transferred to a coolant salt outside of the reactor. The coolant salt is then used to heat gas that turns a turbine, which turns an electrical generator, generating electricity.

Q: What is nuclear waste and how does a liquid-fluoride reactor address this issue?

A: So-called “nuclear waste” or spent-nuclear fuel is produced in conventional (solid-core) nuclear reactors because they are unable to extract all of the nuclear energy from their fuel before they have to shutdown. LFTR addresses this issue by using a form of nuclear fuel (liquid-fluoride salts of thorium) that allow complete extraction of nuclear energy from the fuel.

Q: What advantages does a liquid-fluoride thorium reactor offer a utility?

A: Unlike a pressurized-water or boiling-water reactor, a liquid-fluoride thorium reactor operates at high temperature and low pressure. Its high power density means that the reactor vessel itself is much s maller and lighter than an LWR reactor vessel; small enough, in fact, to be mass-produced in a factory rather than constructed onsite. Its inert-gas coolant does not boil in the event of a loss of pressure, and the fuel, blanket, and coolant salts do not react with air or water. All of this means that the containment building of a fluoride reactor can be much smaller than the containment of a light-water reactor of similar power output.

The basic idea behind nuclear fission is that you can use an electically neutral particle, the neutron, to destabilize a nucleus and cause it to split. This is a big deal because it’s very difficult to get charged particles, like protons and electrons, anywhere near the nucleus–they’re repelled by electrical forces. That’s the basic reason why nuclear fusion is so difficult. 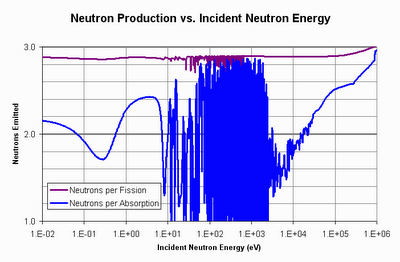 The path that was taken, or at the very least, the path that the nuclear community has wanted to take for the last sixty years, is the path to the plutonium fast-breeder. Confronted with the data that you can’t get enough neutrons from a thermal-spectrum reactor to “burn” U-238, they began to investigate what happens if you use a “fast-spectrum” reactor. At “fast” energies (the energies on the right-hand side of the plot) things start to look a lot better for plutonium. It makes significantly more neutrons per absorption than 2, and so the “burning” of U-238 looks to be quite feasible. But now you have a different problem, that of buil
ding a fast-spectrum reactor. 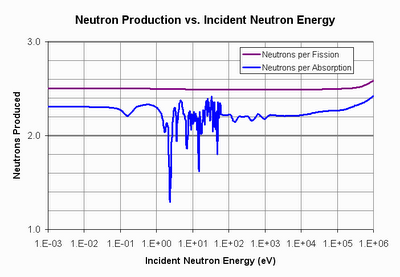