Recent statements at the federal level indicate that the concept of “reprocessing” nuclear fuel is ready to be looked at again. This controversial decision was originally made by President Ford in the twilight days of his administation in October 1976, and then reiterated by President Carter shortly thereafter–that civilian reprocessing of nuclear fuel was to be ended.

A recent article about controversies over reprocessing of spent nuclear fuel. 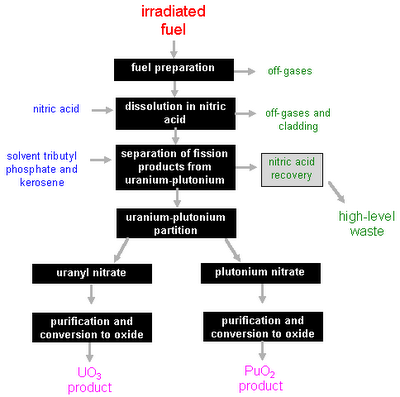 The favored technique for reprocessing spent solid uranium oxide fuel is called PUREX (plutonium-uranium-extraction) and flowcharts of this process can be found here, here, here, and an image of the PUREX plant at Hanford, Washington.

On one hand, advocates of reprocessing will point to the fact that there is still significant amounts of unburned U-235 and Pu-239 remaining in spent fuel, and reprocessing could extract these unburned actinides and use them again. They also often point to a future of fast-breeder reactors where the U-238 could even be consumed (by conversion to Pu-239). Lately, another driving factor for reprocessing advocates has been the dim prospect of another federal repository beyond Yucca Mountain, based on the difficulties with opening that site.

The Foes of Nuclear Energy

Foes of reprocessing come in a lot of stripes. Some are simply against nuclear power in all forms, others do not think reprocessing makes economic sense. One of the basic arguments against reprocessing (that holds some water, in my opinion) is the fact that reprocessing of spent nuclear fuel involves conversion of the solid fuel rod into a liquid stream. The fuel must be chopped up, declad, dissolved by nitric acid, and then go through a complicated series of steps to separate actinides (uranium, neptunium, plutonium) from fission products. Then further steps separate the actinides from one another. At the end of this separation, the liquid stream must be reconverted back to solid fuel again. But that solid fuel is significantly less desirable to a reactor operator because it is much more radioactive than fresh, unirradiated fuel.So none of the reactors in our country utilized recycled fuel. And as I learned when I studied reactor theory, using recycled fuel is more difficult from an analytical prediction perspective because it consists of a melange of different isotopes (U-235, U-236, Np-237, U-238, Pu-238, Pu-239, Pu-240, Pu-241, Am-241, etc.) that each have a different nuclear response (especially in resolving absorption resonances). Contrast that with fresh fuel which consists of only two isotopes (U-235 and U-238). It is not a great surprise to me that this “mixed oxide” fuel is not widely used.

And even if it was, to what end? Pu-239 cannot sustain conversion of U-238 in a thermal specturm reactor, so using recycled fuel in thermal reactors doesn’t get you very far. It might take three reactors to create enough fuel to be recycled to fuel one reactor, and less and less each generation. It’s a losing game (which is why the nuclear industry is always trying to tell you about the brave new world of fast-spectrum reactors).

Liquid-fluoride reactors running on thorium are something else entirely–they can sustain conversion of thorium to fissile U-233 in a thermal-spectrum reactor. They are already in liquid form, and reprocessing of fuel consists of two easy steps (fluorination and distillation) that are done right there near the reactor, during normal reactor operation. And the waste stream, rather than being inflated as in typical reprocessing by dissolution in acid, is actually deflated through distillation, to a concentrated mass of liquid fission-product fluorides (no actinides).

Reprocessing liquid-fluoride fuel is so simple that it would easily be located at the plant site and operate while the reactor was online. No need to transport fuel and no need to fabricate new fuel. Further, since fluorination and distillation are essentially impervious to radiation, there is no need to “cool” spent fuel like in the PUREX process (where high gamma radiation can disrupt the organic solvents used in the dissolution/separation).

Personally, I think reprocessing of conventional solid spent nuclear fuel doesn’t buy you much and will cost you a lot–money that would be far better spent getting liquid-fluoride reactor technology fielded.